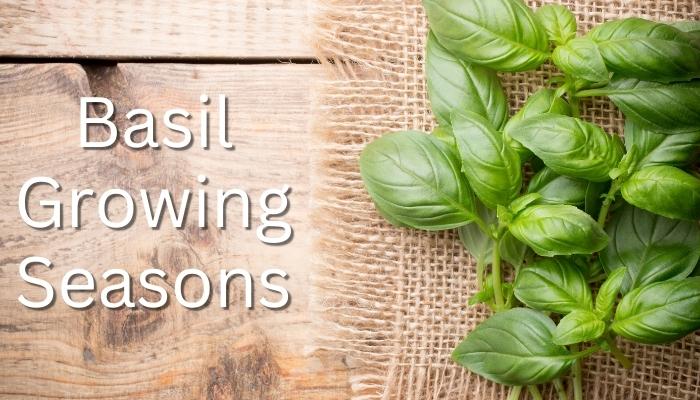 Adding fresh herbs to your cooking is one of the easiest ways of spicing up your weekly meals and providing a valuable nutrition boost. Growing herbs yourself is also rewarding, and with a little practice, you can grow more basil than you will know what to do with!

The United State Department of Agriculture (USDA) has a valuable online map of US Hardiness Zones, and a quick search will reveal your exact growing zone.

When it comes to the versatility of growing climates, the winners have to be sweet basil and Genovese basil. These two varieties will thrive in both cool and hot climates, provided they receive adequate water and sunlight.

Basil Growing Season – What To Know

The growing season for basil varies greatly between states and between different regions in these states, so it’s important to know exactly what Hardiness Zone you live in. Fortunately, growing basil is possible everywhere in the US.

When To Start Basil Seeds

Starting basil seeds depends on whether you choose to grow seedlings indoors or outdoors. For growers wishing to start and keep basil indoors, you can basically do this year-round, provided your home is always warm and you can give plants a sunny spot or artificial light.

If you decide to start seeds indoors and move the seedlings outside later, search your average last day of frost here, then subtract by 15, and voilà! — you have the date you need to start the seeds.

When To Plant Basil Outdoors

Sowing basil seeds directly into the ground is a tricky game as seeds are vulnerable to drying out and to cold weather. Your best bet is to start seedlings indoors and transplant them at around 25-30 days old when they are strong and resilient enough to withstand fluctuations in water and weather.

When To Harvest Basil

Basil can be harvested when a plant has around 12 leaves in total and should always be harvested from the top down, picking off individual leaves or cutting whole stems when the plants are larger. Leaves picked during the morning contain higher levels of essential oils and are more nutritious the sooner they are used.

Picking leaves and harvesting stems promotes new growth and is healthy for plants in moderation. Just remember to pick a little from several different plants as over-harvested plants can find it difficult to keep producing fresh growth.

End of Growing Season for Basil

Growing basil indoors means an indefinite season, although you will usually still experience plants going to seed. This means the emergence of stalks with clusters of vertical seed pods. Growing seasons can be extended by removing these flower heads as soon as they form as they will make basil leaves bitter and less tasty.

Saving seeds from basil is super simple. Just reduce watering, and wait for the seed pods to turn brown. Then snip them off onto a plate or tray. You can then place these seed heads into a jar and shake out any remaining seeds.

New, environment-focused gardening methods have proven that snipping off plants and leaving roots in the ground undisturbed creates healthier soils and results in more abundant crops in the future. This is because the beneficial microbes, which attach themselves to roots, are not removed.

Wilted or dying plants should be composted unless they appear diseased. If this is the case, they must be disposed of away from the garden to avoid contamination.

Idaho is a fertile state and one that covers quite a number of different climates and Hardiness Zones. While warmer regions are more suited to the cultivation of basil, all zones can yield fantastic bounties of this delicious culinary herb.

For regions of Idaho falling in Hardiness Zone 3b (the state’s Northeast), the first frost may occur as early as September 15, with last frosts expected before May 15, meaning a growing season of about 123 days.

Most of the south, southwest, and west of the state’s zone 7b can expect first frosts to start around mid to late October and last frosts to cease around April 10, giving a growing season of around 193 days.

Both of these zones are at opposite ends of extremes, and many growers will find themselves wedged somewhere in the middle of these climates.

Traditional and cold-resistant varieties will thrive in the Idaho spring and summer. Plants to keep an eye out for at your local nursery or online include Amethyst basil and Genovese basil.

Most growers in this state will find excellent conditions for propagating this sought-after and popular herb.

New Jersey maintains a relatively mild minimum temperature, and therefore falls in the zones between 6a and 7b.

Growers located in New Jersey should expect first frosts to start mid to late October, and last frosts to occur anytime during April. This means a growing season varying between 209 days and 170 days.

New Jersey provides much the same summer conditions as those found around the Mediterranean, the home of most basils, although winters can be colder. Look out for round, broad-leaved varieties such as Marseille basil and Purple Ruffles basil.

Unlike its neighbor New Jersey, the state of New York offers a huge amount of different growing climates, and growers should take care to find their local Hardiness Zone.

While the north and central parts of the state experience much colder winters designated as Zone 3b, the southern and Great Lakes areas tend to see slightly shorter, milder winters. These areas range between 6a and 7b.

Western, central, and eastern regions should expect first frosts to begin in mid October and end around April 30. This provides growers in cities such as Albany, Ithaca, Syracuse, and Binghamton a growing season of around 168 days.

Northern areas, including the cities of Watertown, Messina, and Lake Placid, may experience frosts as early as mid September and last frosts around May 10. A relatively short growing season of around 128 days exists here.

Southern coastal and the Great Lakes areas have the longest growing season, lasting for about 178 – 208 days with first frosts appearing between mid to late October and finishing anytime in April.

The warm summer of the south and northwest are well-suited for warmer varieties of basil such as Greek or lemon basil. Cool northern regions will want hardier varieties such as lettuce leaf basil, and all other regions will have luck with Minette and Napolitano basil.

California is a dream state for gardeners as it offers plenty of warmth and sunshine for plants to thrive. There are still areas that see heavy snowfall; however, the vast majority of the state falls in Hardiness Zones 8a to 10b.

While the mountainous northeast experiences heavy snowfall and ranges between Zones 5a to 7a, most of the state sees hot summers and mild winters, varying between Zones 7b and 10b.

Northeastern California residents can expect frost to begin mid or late October and the last frost to occur anytime in April. Between 170 and 208 growing days is considered average.

Central areas, including Sacramento, may see frosts lasting between December and the end of February, which allows for a lengthy season of 9-10 months.

Oriental basil varieties will thrive in warm coastal cities, especially in the south. These varieties include Queen of Sheba basil (beautiful purple flowers!), and Thai basil.

Oregon is one of those states that has an abundance of green thumbs. Whether it’s the climate or the laid-back lifestyle, there are many who cultivate a hobby garden, and basil is often found among their plants.

Around a third of the state benefits from mild, Pacific weather, which puts it between Zones 7a and 9b. The mountainous west of the state is largely in Zones 6a and 6b, although small pockets of 4a and 5b exist.

Coastal areas will see first frosts around November or December, with those regions on the foothills as early as the end of October. Frosts last until around March, which is around 8 months of growing.

Basil varieties that suit the climate of western Oregon are Osmin purple basil and Marseille basil. Eastern-region growers will have success with spicy globe basil.

Gardeners in the majority of Connecticut should have no trouble growing basil during the late spring and summer as frosts are early to finish and late to start, especially on the coast.

Most of Connecticut falls in Growing Zones 6a to 7a.

On average, the first frosts for the majority of the state will usually arrive mid to end October, and the last frosts of the year will finish anytime in April. This means a good growing season of around 183 days.

While, of course, all varities can be grown in warm, indoor environments, it is hardy, stout cultivars that will do best outdoors. Try Greek and Genovese basil varieties and, of course, sweet basil!

Washington growers can expect to find much the same conditions as their Oregon neighbors to the south, although slightly shorter growing seasons may occur. Cooler weather also extends across the northeast of the state.

Although a large range of Hardiness Zones is found here (4a to 9a), most residents on the coast will find themselves in 7a to 9a, and those inland  are typically in 5b to 6b.

For coastal regions, frost will begin to appear in November and will come to an end in March, which provides a good growing season of around 210 days. Inland areas will see frosts much earlier beginning in mid October and lasting until end of April to early May.

Basil varieties that thrive in Oregon will also thrive here, so try Osmin purple or Marseille basil in the western regions and spicy globe in the mountainous east.

Ranking as the 10th wettest state in the USA, much of South Carolina provides excellent growing conditions for many basil varieties.

South Carolina falls into two major Growing Zones: 7a and 9a. While both of these zones will see relatively mild winters, those living in the south will experience longer growing seasons and more favorable conditions.

Most of the state will see the first frosts appear toward mid-November or early December with the last frosts usually appearing in late February or March. This is a very long growing season between 240 and 300 days.

Here, areas close to the Atlantic will succeed with Oriental basil varieties such as Thai basil and Queen of Sheba basil, while ruffled basil, Genovese, and sweet basil are suited to all parts of the state.

With Hardiness Zones varying so much not only across the country but also individual states, your first port of call should be the USDA website for detailed information on your specific location.

Thankfully, however, all summer climates in the USA can support healthy, vigorous crops of varieties like sweet, Genovese, and purple basil, so if you only have access to these common cultivars, you can grow your very own basil crop.