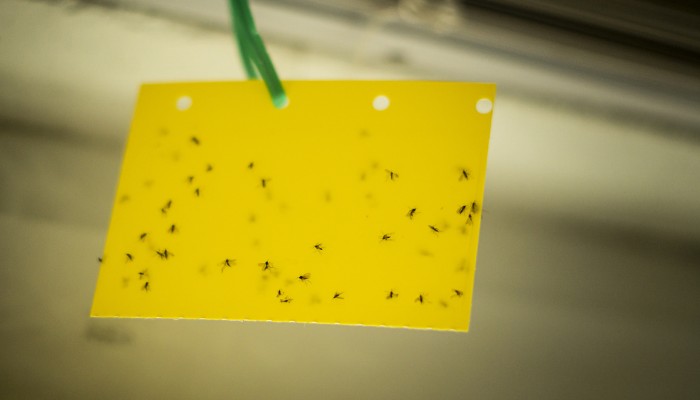 Basil is an aromatic herb with many health benefits and culinary uses. While it’s easy to grow, pests can be a big problem that causes a lot of damage to the juicy leaves of the herb. Gnats are some of the most destructive bugs you have to deal with when growing basil in your garden or indoors.

What Type of Gnats Infest Basil?

Gnats come in different types and shapes, but basil seems to attract a particular type of gnat called fungus gnats. They look very much like tiny mosquitoes and favor moist soil. The hovering gnats form a cloud around the basil and lay their eggs in the moist soil. When they hatch, the young fungus gnats infest the basil and cause considerable damage to the roots.

Although fungus gnats look like mosquitoes and shore flies, you can easily identify them by their gray or black color. They have slender bodies and even thinner legs. Unlike other bugs of its size, the antenna of the fungus gnat is segmented. The antenna is quite long compared to the antenna of the shore fly.

When female fungus gnats lay their eggs in the moist soil around basil plants, the larvae will feed on fungus and other microorganisms in the soil. Eventually, they turn to the roots of the basil and chew on them. This impacts the growth of the herb and can lead to its demise.

Fungus gnats in the soil don’t necessarily mean that the plant is suffering from root rot. The damage the larvae cause can have similar symptoms as root rot. Yellowing leaves and stunted growth are common signs of both gnats and root rot. If you see fungus gnats hovering over the basil, then you have a larvae infestation, not a root rot problem.

Why Fungus Gnats Are Infesting Your Basil

Ruling Out Other Possibilities

Before you take up the complex task of eliminating fungus gnats from your plants, you need to make sure the cause of the stunted basil is a gnat infestation. Root rot can have the same symptoms as gnat larvae infestations. The telltale signs of pests are the hovering adult gnats and moist soil.

How To Get Rid of Gnats on Basil Plant

Chasing away tiny bugs hovering over your potted basil is a tall order. The persistent gnats keep coming back to the moist soil because either they want to lay eggs there or they have already laid the eggs and want to make sure no harm comes to the new generation. Iif you want to fight an army of gnats, try to make the garden or your home as inhospitable to them as possible.

Moist soil is the main attraction for fungus gnats. The moisture in the soil guarantees the presence of fungus and other organisms that the gnat larvae will feed on after hatching. So ensuring that the soil drains well and allowing the top 1 inch of the soil to dry out will make the basil plants less appealing to the bugs.

Organic matter decays thanks to fungi, and the fungi is the main food of gnats at the larvae stage. So, remove all decaying leaves, stems, and other organic materials in the soil to reduce the presence of fungi.

Lack of fresh air and bright light are also factors that facilitate the growth of fungi. Take the plants outdoors, and put them in a sunny spot to sanitize the soil and kill any fungi and other potential food for the larvae. The hot sun will also kill the larvae unless they burrow deep into the soil.

Neem oil is a natural pesticide that kills bugs but doesn’t harm plants or the environment. Spray the basil leaves and the moist soil to deter the gnats from hovering and laying eggs in the soil. I personally recommend this organic neem. It always gets the job done without any detriment to plant health.

Sticky traps like these work on the hovering fungus gnats, but they have little impact on the larvae. Eventually, the gnats will land on the leaves or on the soil to lay eggs. However, you’ll be surprised by the number of gnats you will catch, and reducing the adult population means that fewer eggs will be laid. 6. Hydrogen Peroxide

Hydrogen peroxide is readily available around the house. Dilute it in water, and spray the buzzing gnats. Keep the spray away from the plants as it could kill them.

Soapy water can be used instead ofperoxide. Add 1 tablespoon of dish soap liquid to 1 cup of water, and mix it well. Spray the bugs with it. Make sure the soapy water doesn’t reach the basil.

When the soil becomes infested with fungus gnat larvae, sometimes the only solution is to replace the soil itself. Make sure to shake the root ball of the plant well before repotting it in fresh soil. Dispose of the old soil, and don’t repurpose it in the garden.

Lining the pot with gravel around the stem of the basil can make it difficult for the gnats to reach the soil. Most importantly, the gravel will allow the top of the soil to dry out quickly, thus discouraging the gnats from laying eggs there.

When you run out of options and nothing seems to deter the pesky gnats, then insecticides might help you eliminate them. The downside to using insecticidal soap or oil is that they could damage the basil plants as well.

Epsom salt can prove to be effective against fungus gnats. Use it instead of peroxide or dish soap, and don’t forget to keep it away from the plants.

If you have essential oils, you can add them to a diffuser or a soapy water spray, and they will repel the hovering gnats. Some essential oils are more effective than others. In general, you can use essential oils such as rosemary, geranium, cedarwood, eucalyptus, peppermint, tea tree, or patchouli.

How To Prevent Fungus Gnats

If dealing with pesky fungus gnats is exhausting and time-consuming, you can take measures to prevent them from attacking the plants and buzzing around the house in the first place. Here are some of the precautions you can take:

Although the adult fungus gnats are mostly harmless, the larvae phase is quite destructive. They feed on the roots of the basil seedlings, which could kill the plants. Every 17 days you’ll have a new generation of adult fungus gnats ready to lay eggs, so make the plants and the surrounding area inhospitable to them, and keep the topsoil dry.