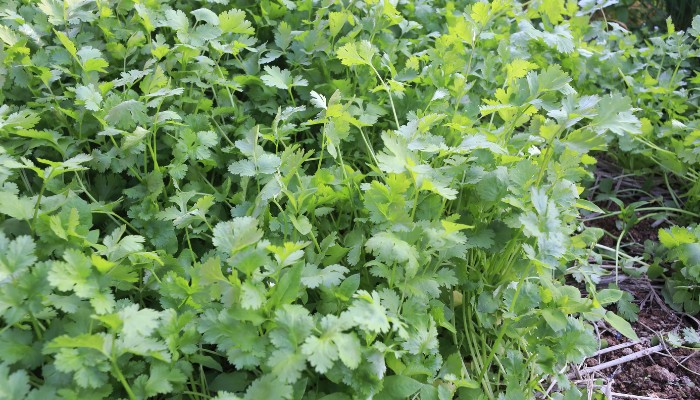 Few herbs are as enjoyable to grow as cilantro. The aromatic leaves are succulent and packed with flavors, and you can harvest as many leaves as you like until cilantro flowers. The only drawback is that cilantro has a short life cycle.

Is cilantro a perennial? Cilantro is an annual herb. After the flowers fade and the seeds mature and dry, the plant will die. You can always start a new plant in the early spring and enjoy the fresh leaves. The seeds, otherwise known as coriander, have many culinary uses and a long shelf life.

Despite its short life, you can still make the most out of cilantro. Read more to find out how to delay the flowering stage in the herb’s life.

Understanding cilantro’s life cycle can help you harvest fresh leaves and keep the plant producing new leaves. Once it flowers, the leaves will lose their flavor.

In the early stages of its life cycle, cilantro focuses on developing lush and green foliage, but that’s not the herb’s mission in life. The true purpose of its existence is to develop flowers that turn into seeds. However, people grow cilantro for its tasty leaves, not for the flowers.

The longest stage in the plant’s life is the foliage stage. It starts right after germination and lasts for about 6 weeks. During this stage, the plant develops a root system and a full crown.

Flowering is the next stage, and it’s a short one. Once the flowers are pollinated, they’ll fade as seeds begin to develop

After the seeds mature and turn light brown, the plant dies.

Cilantro seeds are actually the fruits of the herb. They’re called schizocarps and average about one-eighth of an inch. Each schizocarp contains two seeds that you can split and plant separately. Cilantro seeds turn light brown in the middle of summer, and that’s your sign that they’re ready to harvest.

Along with cilantro leaves, the seeds are quite edible and have many culinary uses. People grind them and use them in a variety of dishes. Add them to your regular dishes, gravy, soups, and marinades to give them a spicy and a little pungent flavor.

As a cool-season herb, cilantro grows best in the cool spring. Plant it as early as possible to enjoy a longer harvest. If you miss spring planting, you can plant cilantro in the fall. It will thrive until the first frost, but cilantro planted in the fall rarely finishes its life cycle.

What To Do When Cilantro Flowers

When cilantro flowers, it will stop growing new leaves and focus its energy on the flowers and seeds. The leaves will lose their flavor and become mild. You can let the plant flower and finish its life cycle naturally. Seeds will replace the flowers, and you can use those seeds in cooking or plant them the next season.

Another option is to pull out the plants and prepare the soil for a different crop.

When the seeds mature, they’ll often drop to the ground and sprout around the parent plant. This can happen throughout the summer. Those new plants will not reach maturity as the heat will usually kill them. This is another reason to harvest the seeds once they mature and not to leave them on the plant longer than necessary.

Can You Stop Cilantro From Going To Seed?

Seeding is cilantro’s mission in life. It cannot be stopped. However, you can delay it. One way to delay this natural process is to keep the plant busy growing leaves and stems. Regular harvesting of the leaves and pinching off the stems at the base of the plant are the easiest ways to delay flowering and seeding.

Start harvesting the leaves when the herb reaches 6 inches high. Trim the tip of the stems to encourage the growth of new stems and give the foliage a bushy look. Also, protect the herb from the afternoon sun as the weather warms up.

How To Know When Cilantro Is Bolting

It’s easy to tell when cilantro is bolting. Small white flowers open up on long stalks and stay in bloom until they are pollinated.

Can You Eat Bolted Cilantro?

You can still eat the leaves and even flowers of bolted cilantro. However, the leaves lose their taste and flavor after the flowers open, and the flowers are mostly for garnishing.

Can You Grow Cilantro Indoors?

If you have a short spring or the spring gets hot quickly, then cilantro will bolt as soon as the foliage develops. One way to avoid that is to grow cilantro indoors.

Indoor cilantro has the same flavor as those growing in the garden, but it has the advantage of having a longer growing season, and bolting will happen much later. You can protect the plant against unpredictable weather conditions and cold nights by growing it indoors.

How To Grow Cilantro Indoors

To grow cilantro indoors, all you need is a pot, a suitable potting mix, and fresh seeds. Old or damaged seeds are less likely to germinate. Then follow these steps:

Does Cilantro Grow Back Every Year?

Cilantro is an annual herb. After the seeds mature, the plant will die. You’ll need to start new plants from seeds to harvest their fresh leaves. You can do that either in the spring or in the fall. Planting seeds every 2 to 3 weeks will give you fresh cilantro leaves for a few months every year.

Does Cilantro Do Well in Pots?

Cilantro does better in pots than in the garden when your microclimate is normally quite warm. Choose a medium-sized pot with drainage holes, and fill it with a potting mix for herbs. Keep the soil evenly moist throughout the herb’s life. Use compost as a fertilizer.

Make sure the potted cilantro is getting 5 to 6 hours of sunlight every day. Shield it from hot weather and afternoon sun. Harvest the leaves regularly to delay bolting.

Cilantro is an annual herb that dies back after the seeds mature. You’ll need to plant the seeds every spring or fall to start new cilantro plants. Bolting is a serious issue with cilantro, especially as the weather warms up.

Trimming the stems and harvesting the leaves will keep the plant busy growing fuller foliage and prevent premature bolting.